Having 20 iPad for the first grades means that they are usually in sets of four in classrooms. The students have become independent on several math apps, spelling apps and others including Kodable and Doodle Buddy. Some of the time that I am in classrooms I have been able to help students work in pairs to access their Kidblogs and add entries (see http://roomonehundrednine.blogspot.com/). We met as a first grade team and winnowed the apps that we are keeping on all the iPads to the ones we agree are most valuable. Every few weeks we collect all of the iPads and use all 20 in table groupings in a classroom. The apps we are using most often are LetterSchool, Teachley: The Addimal Adventure, Word Wizard, Montessori Crosswords, Hungry Fish, Know Your Math Facts, Kodable and TeachMe: 1st grade. Sometimes we are able to access Skoolbo, other times it lags and is too frustrating. While some apps are free we have found that many of them are too limited or have too many ads and we have purchased the full versions. 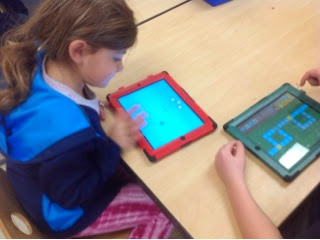 We were pleased to find Addimal Adventure as it teachers the addition strategies appropriate for first grade and allows us to set up all classes on each iPad. It tracks the individual student’s progress and we had access to a pilot that gives us bi-weekly feedback on the class. The app will remain free next year, but the teacher dashboard will be an online feature by subscription. We have allocated some time when we return to school in August to map out a plan for apps usage in first grade and look for ways to build more independence by students using the iPads for reading fluency practice and creation apps like PicCollage, KidBlog, Voicethread and Storykit.

The Kindergarten teachers received two iPads for a center in each classroom midyear. They started off with these apps:


The goal for the Kindergarten classrooms this year was to familiarize the students with a small number of apps and have students use them independently at a station with minimal supervision. They have found that "guided access" is helpful as then students didn't accidentally leave an app while they were at the station. We will be meeting in August to plan what else they want to do next year including story writing and recording for reading fluency.

One of the most informative experiences we have had in developing our plans and uses of the iPads was attending the Auburn Leveraging Learning Institute in November, 2013. We were able to send teams of Kindergarten and First Grade teachers to a day of workshops and learning from other teachers. This is link to the spreadsheet of apps that Auburn Schools have selected to fit with their learning targets and the presentation below explains the goals and rationale for the Auburn project.

The setting: twenty-one 4th graders moving through a Scratch Curriculum that can be found on the ScratchEd community site. There are an increasing amount of resources and ideas for using Scratch in the elementary grades including Wes Fryer's Scratch materials.

The backdrop: Last December we use the Scratch online activity to make holiday cards for the Hour of Code. Middle school students came and helped 4th graders with this introduction to Scratch and coding. In May of this year we did some regrouping for math instruction and twenty-one fourth graders worked on Scratch two or three days a week.

What it sounded like: The most common thing heard in the classroom each day was, "How'd you do that?". The spirit of communication, collaboration and creative exploration vibrated throughout the room.

What it looked like: Adapting the curriculum, I created folders of handouts for students to follow. The lessons are described in this slideshow:

These photos and videos were captured with my cell phone as I was working with students so they are of limited quality, but they portray the activity and learning. 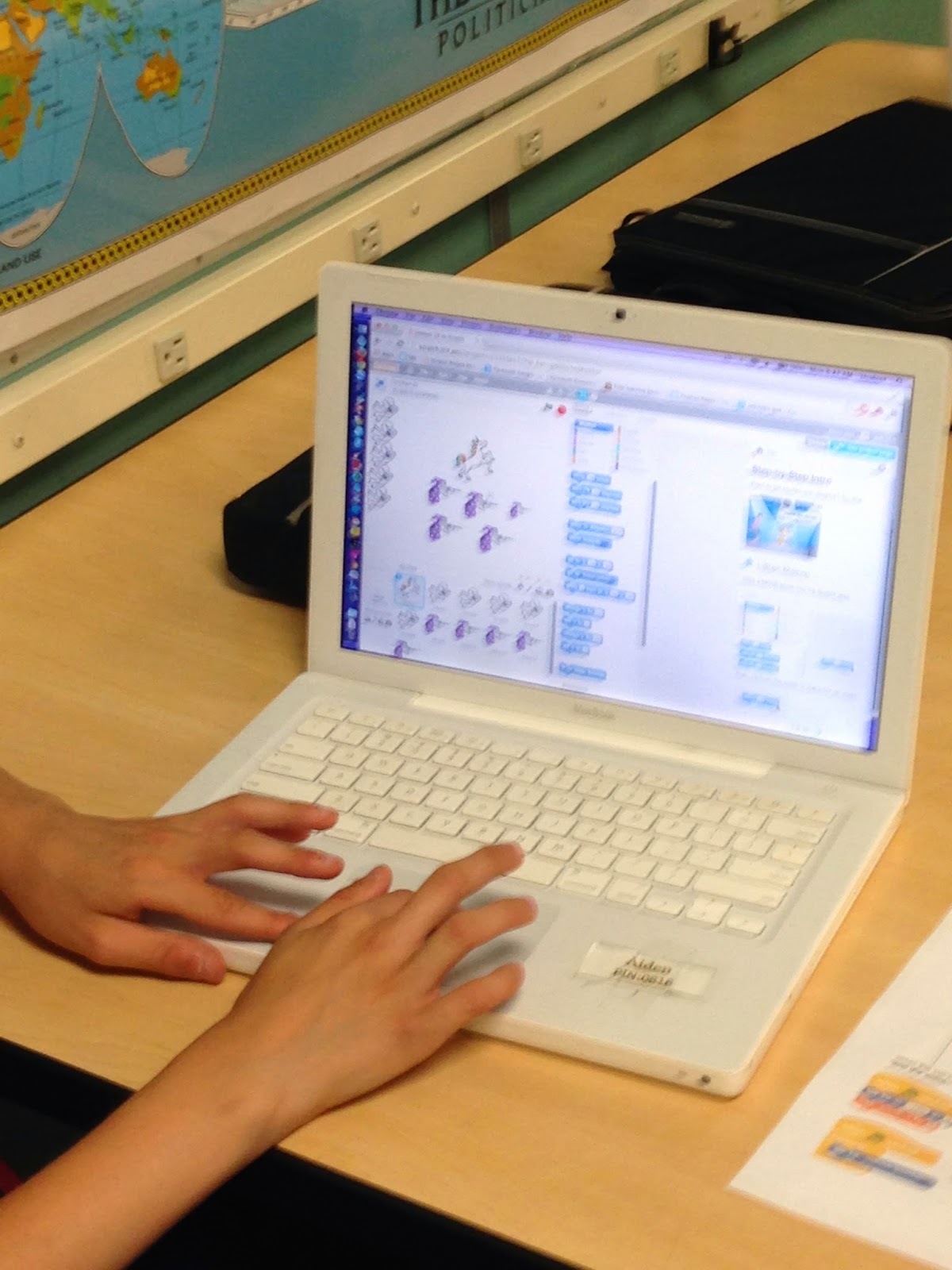 We started with the tutorial on the Scratch website as a review for everyone. Then they were charged with the task of "making something surprising" happen and share it. 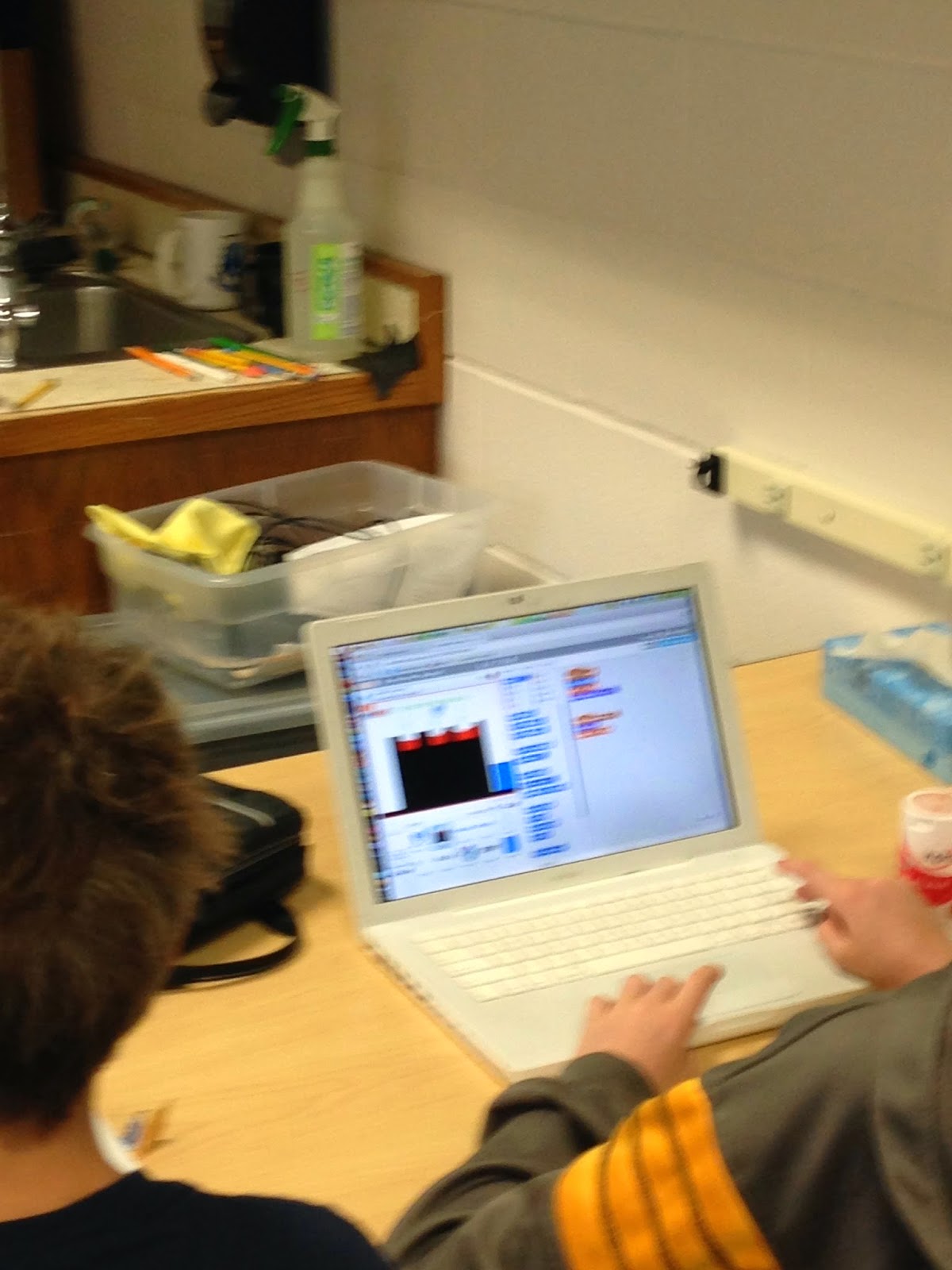 Scratch learning is designed to support collaboration and students often worked in teams. With parent permission they were able to join the Scratch online community, upload their projects and view the structure of posted projects. 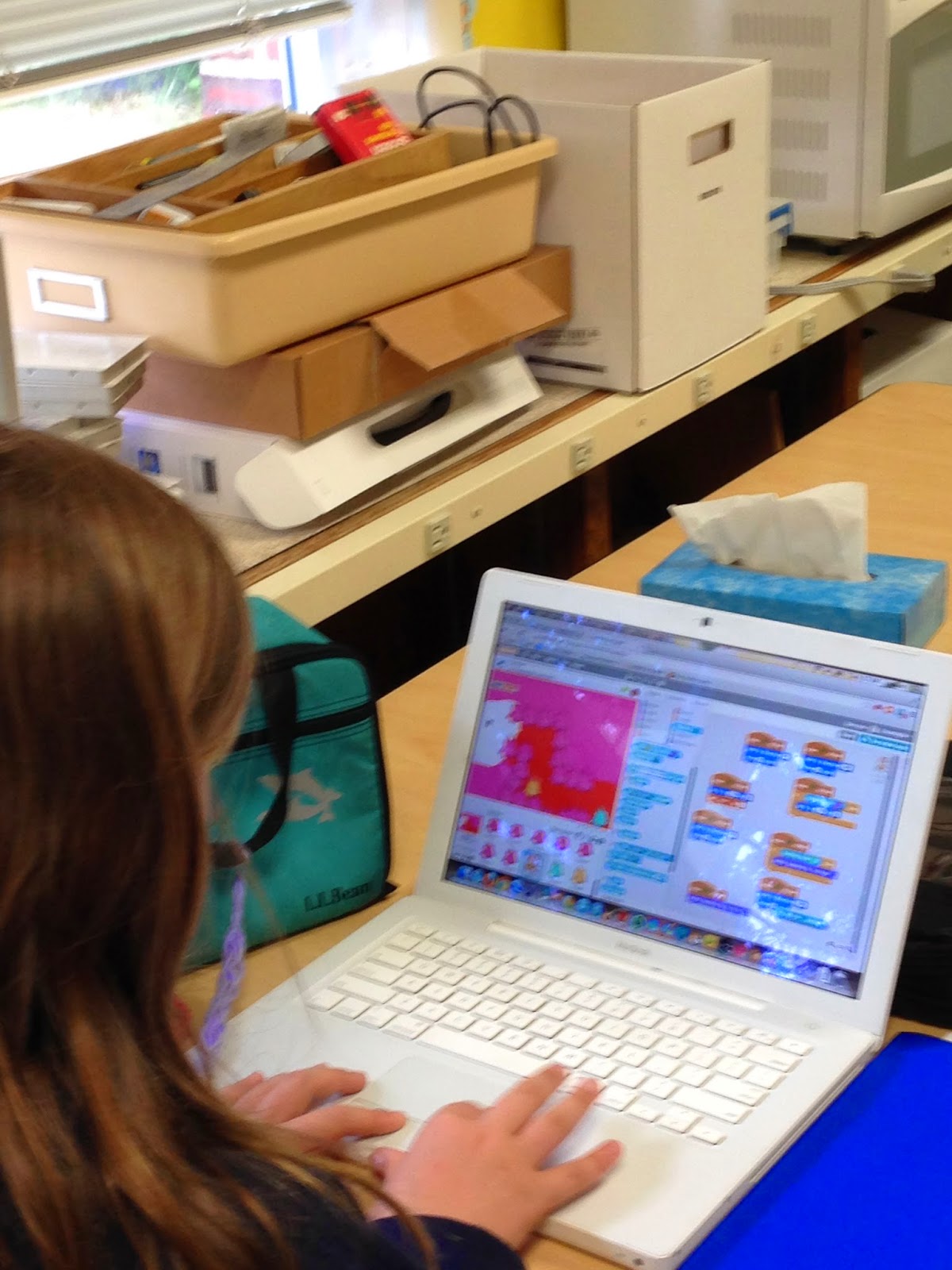 By the fourth class students were becoming experts at "debugging" scripts and moving on to making mazes, games and stories. At the end of each class students volunteered to share their projects and explain their learning. 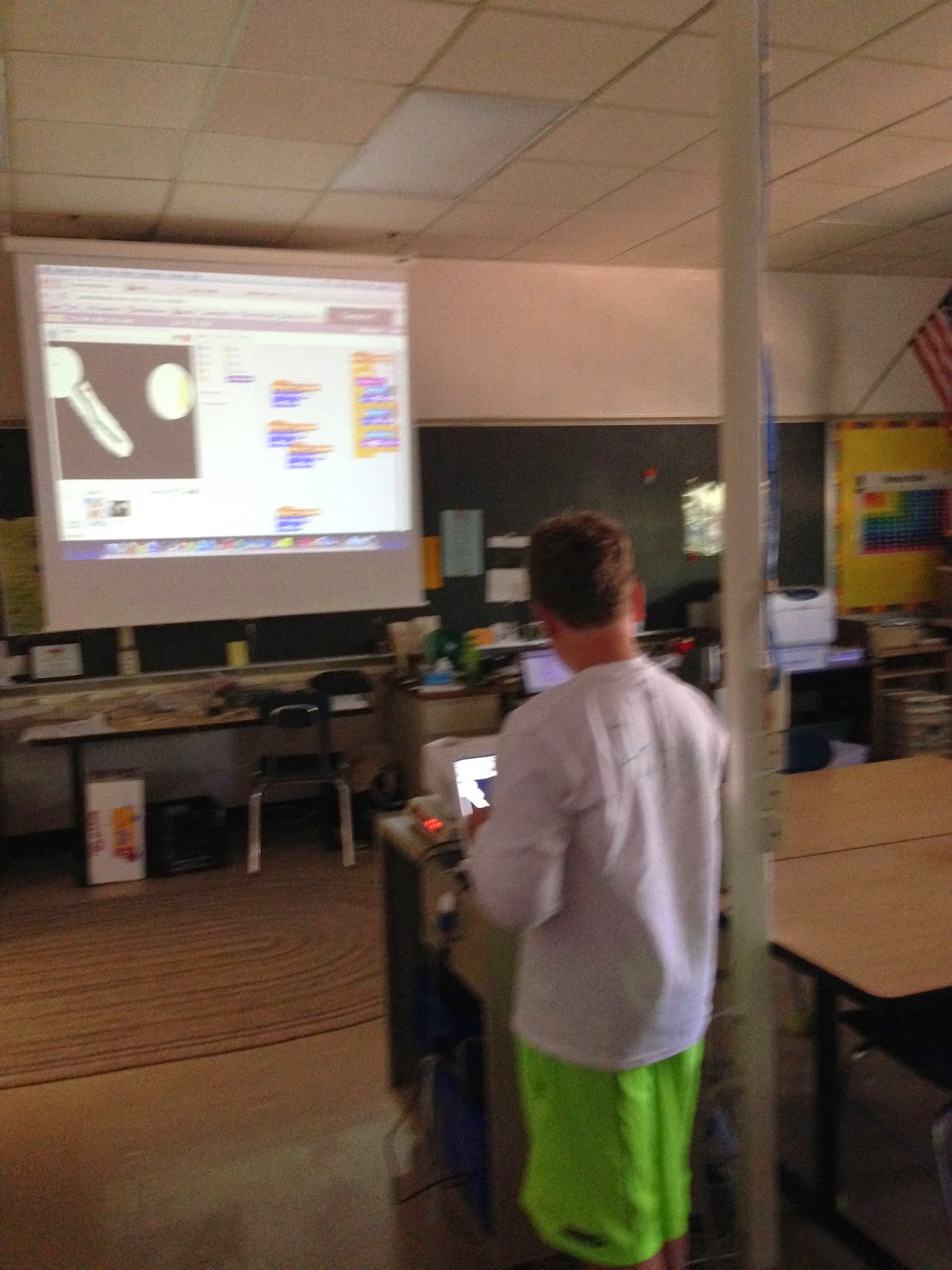 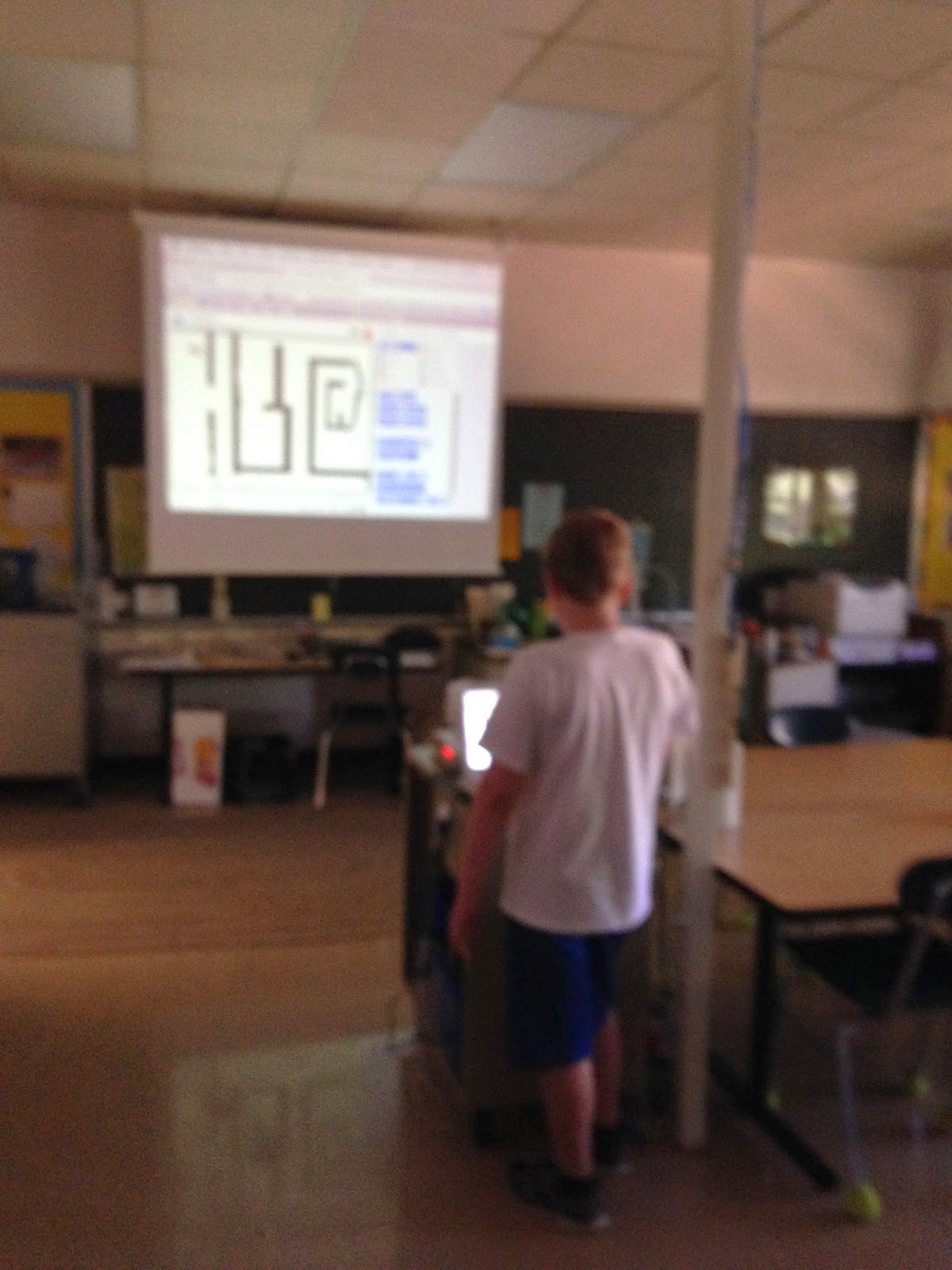 This series of classes stands out for me as one of the most enjoyable, stimulating teaching experiences I've had. The students were engaged, sharing their learning and making progress from one day to the next.

This quote from Howard Gardner was one of my inspirations for this Scratch activity:
Posted by Unknown at 2:15 PM 0 comments

I am an instructional technology educator teaching and learning at Yarmouth Elementary School, Yarmouth, ME. For more on what students are learning through digital media go to our YES technology site. I enjoy collaborating, learning and sharing with other educators, parents and students of all ages. The opinions expressed here are my own and not those of the Yarmouth School District.